Game jam for Just Another Jam.
You control a wizard that needs to keep a golem printer printing. Collect the colours from the surrounding area but beware vampire bats will steal the ink from the printer.

Please can you leave a comment below to help me improve my game development skills?

Question you can answer in the comments:

Well done! The concept is creative, and the game is both fun and challenging. Very impressive that you made it in only a couple of days and it was your first time with the tool.

I do think a little more explanation of the controls/goals/mechanics would be useful, but the basic controls are pretty simple, and the rest of the mechanics become apparent after playing a little longer.

I wonder if you could accomplish your regrowth idea without additional assets by just not rendering the coins or making them smaller while they are regrowing? At least making them a different color would be helpful. It’s hard to tell the difference between a yellow coin and a recharging coin.

Also, it would be helpful if the stats at the top of the screen were always there. It seems they disappear in favor of the smaller ones above the printer when that is visible but those are harder to read.

Thank you for taking the time to write a detailed comment. This helps me a lot.

Reply
Just Another Games2 years ago

Really not bad. The game is interesting, the mechanics itself, but I did not quite understand how it works.

Thank you for your comment. If you are talking about the graphics. The printer graphic sucks. I am not very good with art at all rely on are assets that I purchased from Humbel bundle. With the theme of cyan, the only thing I could think of was a printer. So wizard printing press that needs colours to print. "Print what?" scroll, but I could not get the scroll to tween :( and look cool. Also, the coins should be flowers that regrow after you pick them, but that need art :(
I used this game jam to learn Godot - Installed it for the first time on Monday last week and took part in the jam on Friday after work. 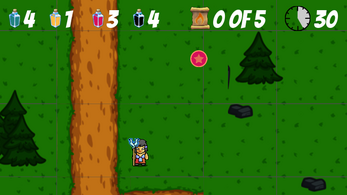